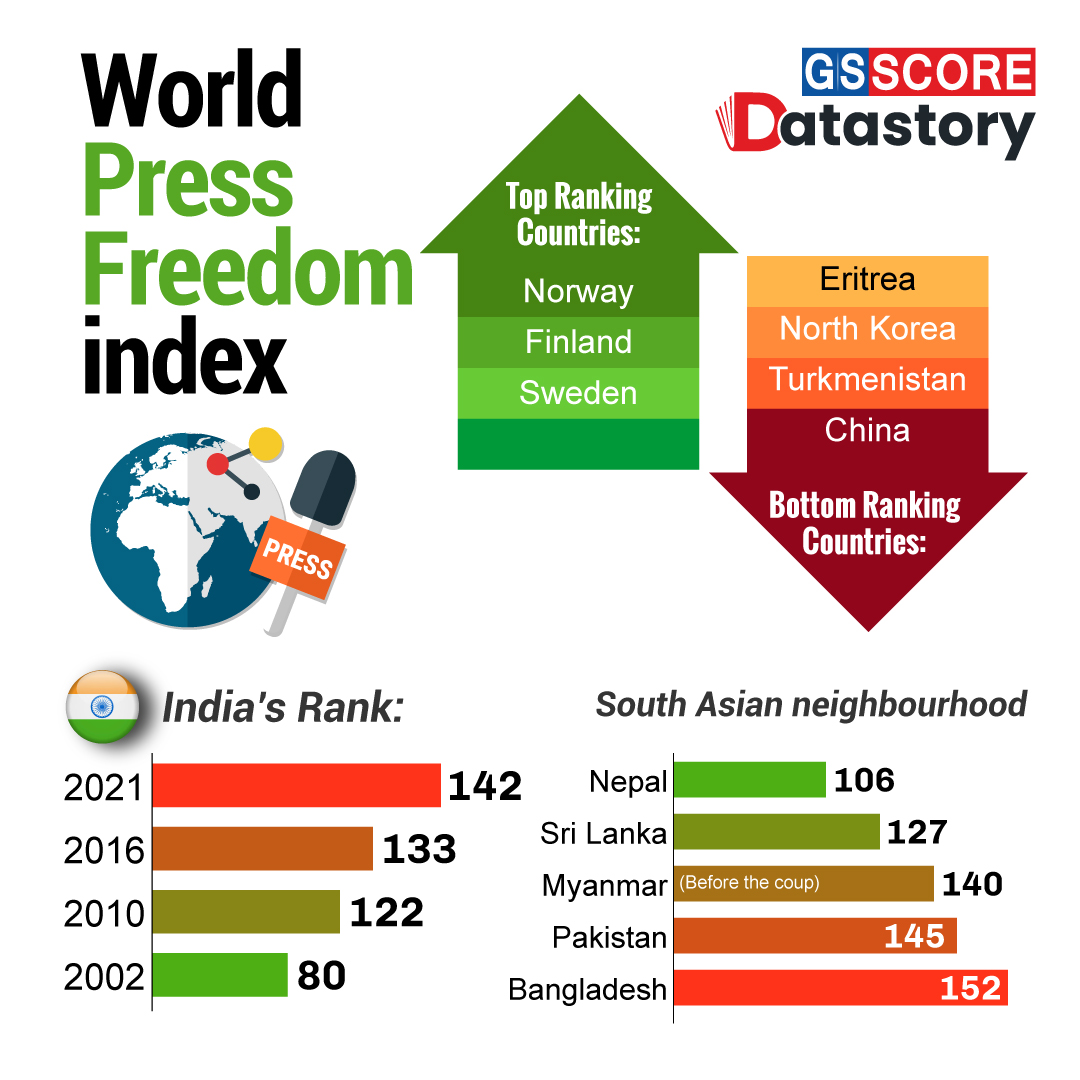 The Paris-based Reporters Without Borders (RSF) publishes annually a World Press Freedom Index (WPFI) purporting to evaluate the level of freedom available to the media in 180 countries. From a rank of 80 in the inaugural WPFI report, 2002, India’s rank fell to 122 in 2010 and 131 in 2012. The recently released 2021 WPFI has ranked India at 142, down 2 places from 2019.

India continues to be counted among the countries classified “bad” for journalism and is termed as one of the most dangerous countries for journalists trying to do their jobs properly.

The latest index released on Tuesday ranks 180 countries, topped, yet again, by Norway followed by Finland and Denmark, while Eritrea is at the bottom. China is ranked 177, and is only above North Korea at 179 and Turkmenistan at 178. India is ranked 142, same as last year, after it had consistently slid down from 133 in 2016. In the South Asian neighbourhood, Nepal is at 106, Sri Lanka at 127, Myanmar (before the coup) at 140, Pakistan at 145 and Bangladesh at 152.

India shares the “bad” classification with Brazil, Mexico and Russia. As per the report, Journalists “are exposed to every kind of attack, including police violence against reporters, ambushes by political activists, and reprisals instigated by criminal groups or corrupt local officials.

Speaking about the larger Asia-Pacific region, the report mentioned that “instead of drafting new repressive laws in order to impose censorship, several of the region’s countries have contented themselves with strictly applying existing legislation that was already very draconian – laws on ‘sedition,’ ‘state secrets’ and ‘national security’.”

2021 report “shows that journalism, the main vaccine against disinformation, is completely or partly blocked in 73% of the 180 countries ranked by the organisation,” and, the “2021 Edelman Trust barometer reveals a disturbing level of public mistrust of journalists, with 59% of respondents in 28 countries saying that journalists deliberately try to mislead the public by reporting information they know to be false”. The report noted that “only 12 of the Index’s 180 countries (7%) can claim to offer a favourable environment for journalism”.